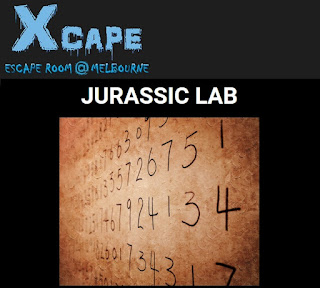 My group of friends (4 adults) checked out Xcape Melbourne's Jurassic Lab room in November 2015.  This was our 24th escape room so far in Australia and our fourth escape room in Melbourne.

The foyer was unappealing - they had clearly only opened recently because the artwork on the walls had been half painted, there were piles of slabs of softdrink in the corner.  They didn't look like they were ready to open, in my opinion.  The game masters were not overly enthusiastic at all.

They currently have 3 rooms – Jurassic Lab, Mausoleum Madness and Haunted Prison.  I picked the Jurassic Lab room for our team because it is their most difficult room.  The only reason we did this room was because they had a Scoopon deal on for $75 for a team of 4 (and we had one night to kill on our Melbourne long weekend).

First off, I'll say what I enjoyed most about Jurassic Lab:

Now for what I didn't like about Jurassic Lab:

I am probably being overly harsh on this room.  Objectively, it wasn't all bad - the puzzles were ok and there was some variety throughout the room.  However, compared to the other rooms in Melbourne that we tried (which were all awesome), this room was not in the same league at all.

Give this one a miss.

Overall Summary:  A very average room - definitely not worth the price!

Contact me here (or send an email to escaperoomsydney@gmail.com)